“I recommend your yogurt to all my patients.” 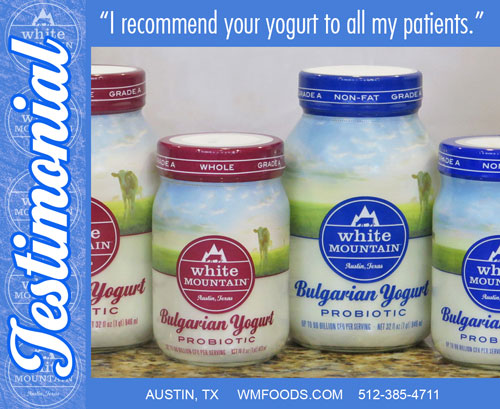 I have searched for this perfect yogurt since I had an amazing yogurt in Lima, Peru, 25 years ago. I happened to stumble upon it when I saw it in a clear glass jar. After just two days I was certain this was not only delicious, it was the healthiest. I recommend your yogurt to all my patients. ─ Carmen, pediatrician

This is my boyfriend’s absolute favorite product. Because I work in the natural foods industry, he hears a lot about different products I come across, but this has been the one that he can’t stop raving about. He suffers with digestive issues occasionally, and just a couple of spoonfuls of your yogurt helps almost immediately. We literally have a conversation about your product or company at least a couple times a week! Please keep doing what you’re doing. :) ─ Haylee

Read More Testimonials
Send Us Your Testimonial
Write a Review On Yelp
at 4:47:00 AM No comments: 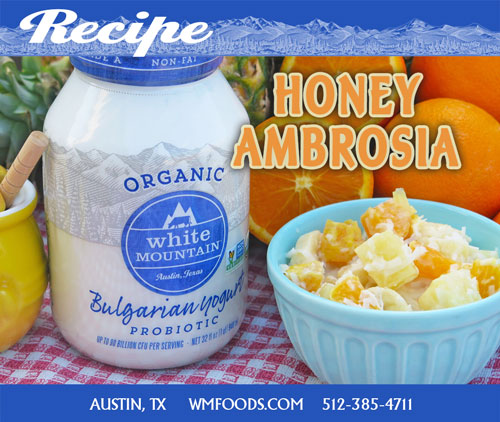 More Recipes
Send Us Your Recipe
Our Website
at 8:43:00 AM No comments:

Strings in the Park - Rescheduled for Sunday, June 2 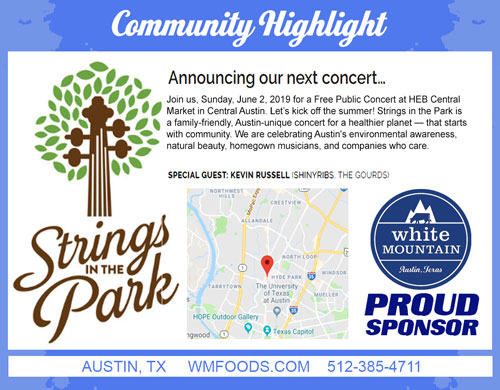 White Mountain Foods is a proud sponsor of Strings in the Park, a free public concert at Central Market in Central Austin. The event is family friendly and celebrates Austin’s environmental awareness, natural beauty, musicians, and food! Check it out Sunday, June 2! 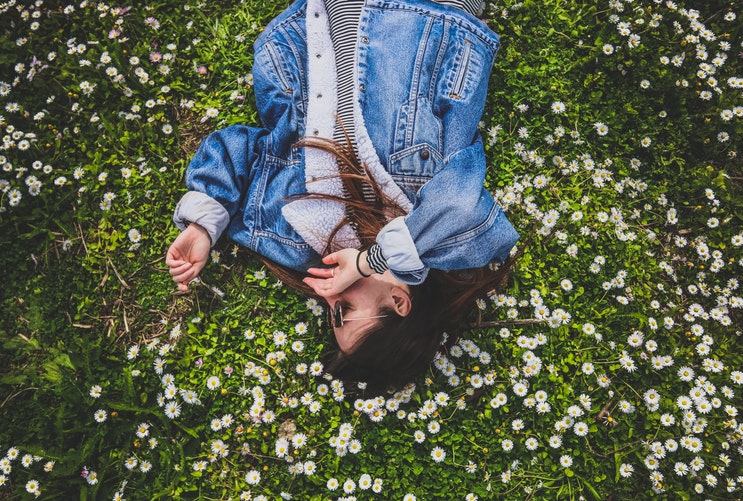 If you have seasonal allergies, you know that sneezing and congestion can make you question leaving the house. It’s so tempting to reach for antihistamines. Unfortunately, these drugs come with side effects like drowsiness and nausea. And they only put a temporary Band-Aid on the symptoms. This has been a dilemma for allergy sufferers for so long it’s been hard to remain hopeful.

The good news is that allergic rhinitis, also known as hay fever or seasonal allergies, is now being linked to gut health. Simple changes everyone can make—like eating probiotic foods—can improve gut health. So, before you get discouraged about your allergies, learn what science is saying about your gut–sneeze connection.

To understand how probiotics could help tame allergies, it helps to know what’s going on in the body during an allergic reaction.

Allergic reactions are the body’s way of getting rid of something it sees as a threat. These unwanted visitors are called antigens. When antigens enter the body, they trigger the release of a hormone called histamine. Histamine leads to inflammation, resulting in allergy symptoms.

An estimated 30 percent of the population in North America deals with hay fever. Their bodies see common antigens like pollen, dander, and dust as dangerous invaders—cue the puffy eyes, congestion, sneezing, and rashes.

While allergy symptoms can put a damper on your fun, a histamine response is natural. It helps protect the body from antigens that can be harmful, and it eliminates them. Imagine if our bodies didn’t encourage a sneeze when strange things entered our sinus cavity—Yuck!

It’s when the immune system overreacts that severe seasonal allergies keep you down and out. But why do some people have this overreaction and not others?

In the 1980s, scientists proposed that rising allergy rates were due to super-clean modern environments. Children were no longer exposed to germs found in nature. This is known as the hygiene hypothesis.

Studies show that children raised on natural farms do have fewer cases of hay fever, asthma, and eczema than children raised elsewhere. Their immune systems have learned when to sound the histamine alarm. This explains why some people are married to a box of tissues come May flowers, while others are carefree.

We know that letting in bacteria from nature can help build immunity. Now science is revealing another bacterial link to allergies—the gut microbiome.

The Connection Between Allergies and Gut Health

Research shows a correlation between gut health and cognitive function and a correlation between gut health and mental health. Our gut has rightfully earned the title of “second brain.” But gut intellect doesn’t stop there. We now know that a whopping 70–80 percent of the body’s immune system lives in the gut. So the majority of our immune system relies on a healthy gut ecosystem.

The gut–immunity relationship is symbiotic. Immune cells in the digestive tract, known as Peyer’s patches, protect the gut’s mucus membranes. These membranes are then able to produce and maintain a healthy wall of mucus, giving the good gut bugs a home. These guys break down proteins, enzymes, and vitamins in food, meaning good digestion.

Any disturbance in the microbiome dulls gut function. The largest part of the immune system is then disconnected from the rest of the body. Without this communication, the host is miserable long after an allergen is gone.

An unbalanced microbiome can lead to leaky gut syndrome. In those with leaky gut syndrome, the microflora is depleted, leaving gaps in the gut wall’s mucus. Contents of the gut can then leak through the gut wall and into the bloodstream and organs. Stomach acid and food particles ending up in places where they don’t belong is not a good thing. At this point, the body sees no choice but to have an allergic reaction.

Aside from allergies, poor gut health has been linked to diabetes, Alzheimer’s, heart disease, depression, and obesity. This is all the more reason to start tending to your gut.

The Science on Seasonal Allergies and Probiotics

It’s now common knowledge that probiotics are good for your gut and health. According to the World Health Organization, probiotics are “live microorganisms that, when administered in adequate amounts, confer a health benefit on the host.”

Studies are currently examining the therapeutic use of probiotics for treating allergies. Some probiotics show good results for reducing hay fever symptoms in children. Others show promise for improving quality of life for adults with hay fever.

Research is opening doors, but the idea of probiotics as medicine is still a new kid on the research block. Studies aren’t conclusive yet. Several probiotic strains are being tested with different methods. We’re all eager for a solid answer, but for now we have to look at what we do know to tend to our gut, immunity, and allergies.

What we know for sure is that probiotics are like fertilizer to the microscopic ecosystem in your gut. They give it diversity to grow and adapt. We also know that people have been eating natural and fermented foods, such as yogurt, for their health benefits for thousands of years.

Once a topic of debate, it has now been confirmed that probiotics in yogurt do survive digestion. This includes L. Acidophilus, S. Thermophilus, B. Bifidum, and L. Bulgaricus. These cultures are found in White Mountain Foods’ traditional style Bulgarian yogurt.

In the midst of getting bogged down by hay fever, chances are the last thing on your mind is your gut microbiome. But remember your immune system needs to work with a team of happy gut bugs. This helps your body know when to go to war and when to make peace with harmless antigens.

Although there’s no silver bullet for seasonal allergies, it may be worth it to conduct your own study. How? By incorporating probiotic yogurt into your diet. What have you got to lose?

Jenessa Stark is a Pacific Northwest-based food and wellness writer. She spends her free time reorganizing her pantry and nudging snow dogs off her yoga mat.
at 3:16:00 PM No comments: