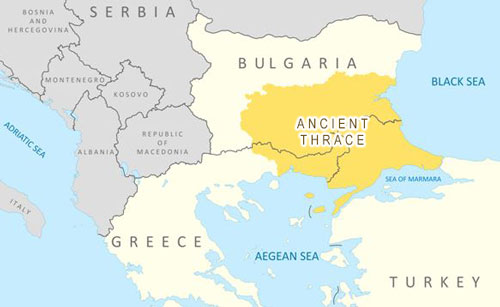 Yogurt (or yoghurt) is believed to come from Thracian tribes circa 4000 BCE, perhaps going back as far as 10,000 BCE. Middle Eastern herdsmen kept milk in goatskin bags as they did their work in the hot sun. The warmth of the environment, the motion of the bags against the pack animals and the intestinal juices from the goatskin produced the tangy custard we now call yogurt.  Observing that fermented milk lasted longer than fresh milk, they would add the fermented milk to fresh boiled milk to generate new batches of yogurt.

India and Persia are known to have used yogurt as an ingredient in making other foods as far back as 2000 BCE.  Around 100 BCE, Pliny the Elder referred to yogurt when he wrote that nomadic tribes know how to: “thicken the milk into a substance with an agreeable acidity.” The word yogurt comes from the Turkish word yoğurmak. The Turks were the first to begin studying the health and medicinal qualities of yogurt.  Many believe that Genghis Khan kept his army healthy and strong by making yogurt a large part of its diet.  The French King Francis I brought yogurt to Europe after it reportedly cured him of severe diarrhea.

Scientists had studied the product for years, working to understand what produced fermented milk due to its apparent properties of aiding in health and longevity when, In 1905, Bulgarian Stamen Grigoroff discovered the cause of milk fermentation, which led to the publication of the scientific paper, “Some notes regarding the yoghurt” printed in Les Comptes rendus de l’Academie des sciences, 1908.  The microorganism Grigoroff discovered was named bulgaricus and referred to as the Bulgarian milk bacterium.  These interacting microbial organisms were found to produce profound changes in milk content, generating health-supporting effects not found in milk alone, and also making the milk more easily digested.

Today, “Bulgarian yogurt” is understood to mean milk product fermented using the effective blend of the bacterial cultures L Bulgaricus and S. Thermophilus (another agent found in ancient fermented milk). Those cultures are found in White Mountain Foods Bulgarian yogurts. There have been many scientific studies in more recent years looking into the health-supporting qualities of yogurt.  While many products are called “yogurt”, the manner in which they are mass-produced and modified for modern, western palates is far removed from the live culture fermentation methods traditionally used to produce what was then a staple of a healthy diet.  White Mountain Foods adheres to that old-world 24-hour fermentation process and utilizes only two simple ingredients - yogurt culture and milk, adding nothing else - providing you with a healthy product that humans have been using as part of a healthy, robust diet for thousands of years.